Can a country shutdown the Internet for its citizens with a simple kill switch? There have been many debates about this in the past and it seems that the answer is a resounding ‘yes’. Further proof of this surfaced yesterday with news that the Syrian Government shutdown complete Internet access for the country at +10:30 UTC.

The incident was reported by Akamai and Renesys (they monitor network activity) and they claimed that there was a sudden drop in Internet activity to and from Syrian routers. Within no time the monitored activity reached the lowest possible level which suggested that Internet activity in Syria had come to a complete standstill. This incident represents the worst communications disruption in the country ever since the ongoing civil war broke out 20 months ago. Additionally, cellphone service and landline services have also been afflicted and are only available in sporadic regions. 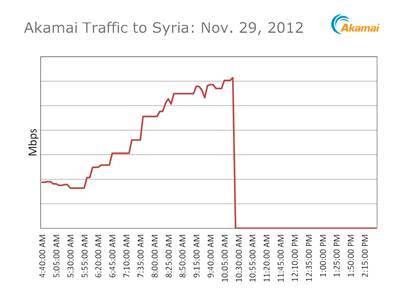 Who killed the Internet in Syria?
This is not the first time such an incident has occurred around the world. In 2011, the Egyptian Government also cut off Internet access for its people and Burma and Nepal have also carried out similar actions in the past. Moreover, Iran regularly eats up bandwidth in the country so that many applications refuse to work for people. Other cyber crimes also regularly plague citizens from nations all around the world.

In Syria the Internet is controlled by the Syrian Telecommunications Establishment, a state-run organization. This points to the fairly obvious assertion that the Syrian Government should be held responsible for the shutdown. But the Government has released a conflicting announcement which claims that ‘terrorists’ are responsible for the communication shutdown by cutting the Internet cables. Without delving too deep into the political finger pointing and conspiracy theories, we would like to focus more on how exactly this can be done.

How can a country kill the Internet?
Primarily, there are two ways in which a country can block Internet access for all its residents. The first method involves shutting down all the routers that direct web traffic from within the nation to across its borders. The second method is to simply shut down the routers of all the ISPs (Internet Service Providers) in the country. It seems this is the method that the Syrian Government has exploited.

Experts have claimed that the Syrian Government also altered the routing tables of ISPs to send all web activity into a ‘cyber blackhole’. All routers contain a series of tables that determine which IP addresses to visit but these can be tweaked by someone in power (Syria has 84 IP addresses). Moreover, every country has a limited number of international gateways for data transfer and these can easily be blocked by the Government, especially if the centralized agency that operates this mechanism is state-run.

While Syria remains cut off from the web and the rest of the world debates the morals of an ‘Internet kill switch’, we would like to take a moment to remind you that the Internet is not the safe haven that many people mistake it to be. Data over the Internet is vulnerable and prone to security lapses, and in extreme cases the web can be pulled out from under your feet without prior notice. So keep your data protected, keep your machine updated and utilize the best security software you can find.

Major security breaches in 2014 and other IT Security News