As the tree of Facebook is growing exponentially and making the world even smaller, it is also getting crowded with scrupulous hoaxes and scams. For an unaware user, it is difficult to tell these hoaxes from genuine Facebook posts or status updates. In this blog post we have outlined some of the most common scam and hoax posts that have been and are doing the rounds on the social network. If you come across any of these, be sure to delete them and advise your friends to do the same and avoid spreading them further.

#1. Shocking Video Posts
Just recently I came across a Facebook post that claimed to show a ‘shocking video’ of the biggest snake in the world. The post had a teaser image of a giant snake and a man, as you can see in the image below. Not only is the image a bad example of Photoshop, but the entire thing is a hoax designed to scam curious users. Clicking the video will take the user to a third party website (that may look like Facebook) and ask them to share the link publicly or complete a fake online survey before they can see the video. Even if the user does all that, they will never get to see the video, because there isn’t any. 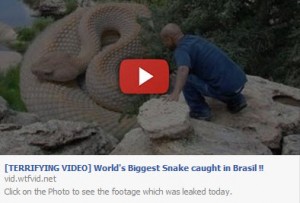 #2. Your Favorite Celebrity Just Died Posts
If online scammers had their way, then all celebrities would have vanished from the face of the earth. Back in the month of August 2013, a hoax video on how Eminem got stabbed, went viral on Facebook. And just recently, Rihanna became a victim of fake celebrity death reports. Even these videos work in the same fashion as the ‘Shocking video’ scams.

#3. Fake Facebook App Scams
Orkut, the long-lost social media hero, allows its users to know who all visited their profile. Imagine the hoo-ha if such a feature comes into Facebook. The ‘Know Who Visited Your Profile App’ or ‘Facebook Profile Viewer App’ claims to do the same thing for Facebook users. Installing such apps will only drop a nasty malware on your system, and let attackers steal your profile information.

#4. Free! Free! Free!
Free giveaways are a classic example of social media scams that have stuck to Facebook like a bad stain. The word ‘Free’ is good enough to grab just anyone’s attention. And this is what scammers capitalize on. In exchange of some information (personal and otherwise) or downloading a software, the user will be eligible for the free goodies.

#5. Fake Virus Warning Posts
When the element of terror drops onto social networking sites such as Facebook, there is but fire all over the place! And one classic example of this are fake virus warnings. Most users take such warnings for real and share them with others, and end up promoting the scammer’s cause.

#6. Facebook Account Disabled Scam
This is a phishing scam that targets Facebook users. One fine day you might receive an email suggesting you to authenticate yourself by logging into Facebook. It will also contain a link which will take you to the company’s login page. The page might look exactly similar to the real Facebook page. And if you go a step further and put in your login information, you are actually handing it over to the hacker who crafted this page.

Social media platforms were created to bring people closer.  There is nothing social about spreading unconfirmed news, viral posts, and scams. So, whenever you come across any shocking, terrifying, or unusual posts, confirm the same from other sources before you hit the ‘Like’ or ‘Share’ button. Stay safe!

Twitter bug attack: All you need to know & ways to fight such attacks