When Windows XP was first released in October 2001, the Apple iPod was just 2 days old and Wikipedia had only been around for a few months. But now, there is less than a month to go for Microsoft to pull the plug on Windows XP with the impending deadline of April 8, 2014 just around the corner.

The ideal solution here is to upgrade the OS from Windows XP. Microsoft will soon be withdrawing all support for XP and this will leave machines that still run XP after April 8 vulnerable to zero-day attacks and numerous stability issues.

However, several businesses around the world and in India will continue to operate their legacy machines on Windows XP. The reasons for continuing with the OS can be related to cost, compatibility, convenience or simply negligence. Nevertheless, if your business has chosen to continue with Windows XP on one or more machines after April 8, then here are some necessary steps you must take to minimize data loss, data theft and other security concerns.

Run the XP machine(s) in a virtualized network

Application virtualization or session virtualization can help run XP machines in an isolated environment. This will allow XP running machines to be used for whatever task they have been used so far without affecting other machines and devices in the network. Moreover, a virtual environment will lock down the machine and any threats that may or may not arise via the OS. This is especially relevant for enterprises that use custom apps which cannot be upgraded anymore on XP machines.

Keep a backup of all data on the XP machine(s)

A machine running XP beyond April 8 is highly susceptible to several risks. In spite of all possible precautions, it can get infected. So a backup of all the data on the machine should be mandatorily stored. Additionally, no crucial or confidential data should be stored on the XP machine(s).

Ensure that XP is updated to the latest patch

Since Microsoft would not be releasing any further patches after April 8, you should ensure that you have the latest patch released by them. This will at least keep your machines safe as per the latest patches and security discoveries.

Use a web browser other than Internet Explorer

While accessing the Internet on XP, do not use Internet Explorer as your browser. After April 8 there will be no more updates for IE as well so it is necessary to use another web browser like Chrome, Firefox or Safari that is updated to the latest version.

If there is any third party software on your XP machine(s), then you need to remove it. Security holes in third party software can damage your enterprise network so all possible culprits need to be gotten rid of. If you do need to keep some third party app, you should disable its browser plugin. Moreover, set the browser to always ask what to do.

Most importantly, ensure that you have a reliable security suite that keeps your enterprise network protected. Products like Quick Heal Endpoint Security 5.3 & Quick Heal Terminator can help secure your network and have several features that can keep your XP running machine(s) well protected. 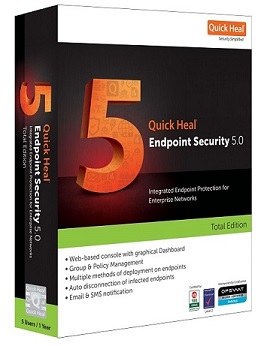 Quick Heal’s behaviour based detection actively safeguards against threats whose signature is unknown on the database. So for a machine using XP that will soon need to deal with several unknown and signature-less malware, Quick Heal can provide effective security. Lastly, ensure that your network Firewall is turned ON and that it is turned up to the strongest possible setting.

Some more points to keep in mind:

# According to Microsoft India, 84% of PCs in large businesses have moved away from XP. But small and medium sized businesses are more at risk.

# Without a proper migration plan, companies risk facing compliance issues. Research firm Gartner says that over 15% of medium and large enterprises will still run XP on at least 10% of their PCs even after April 2014.

# Microsoft India has also reported that 52% of PCs in banks, 30% in Government offices, 26% in manufacturing companies and 26% in software firms were running on XP.

Future Watch I: The impending dangers of Hacktivism and political hacking

I have an old desktop which runs on XP and is protected by QH Pro. Is it feasible to use Linux OS instead of XP? If yes, how will the QH Pro software migrated to protect?
Kindly advise me in the matter at your earliest.

For the migration from XP to Linux for QH Pro, you would need to have a word with our support team. They would be able to guide you through this better. You can call them at 0-927-22-33-000. Or you can even raise a query at https://www.quickheal.com/submitticket.asp. Our support team will get back to you to resolve this.

in case I do not want to contnue with Microsoft XP what is the option from Microsoft that I should opt for? and, how do I proceed in that case for the alternative from Microsoft?

You can opt for Windows 7 or Windows 8 from Microsoft. Both are stable operating systems. However, assuming you have XP, your machine would perhaps be a bit older so Windows 8 may not run smoothly. So we would recommend you get Windows 7. Here is a link for the Microsoft tutorial for upgrading from Windows XP to Windows 7 –> https://windows.microsoft.com/en-in/windows7/help/upgrading-from-windows-xp-to-windows-7#T1=tab01.

What does Quick Heal suggest for individual users who continue to run WindowsXP on their PCs to avoid virus attacks ? Is QuickHeal going to provide any support through QuickHeal Total Security?

Quick Heal will continue supporting Windows XP for at least 2 more years. Some of the tips mentioned in this post will be applicable for home users as well. We are also coming out with a post soon on what steps home users can take if they are using XP. So we will soon have lots more detailed information for you.

Keeping a backup is always a good precaution so you should definitely keep it for your data.

Hi
Microsoft will discontinue support for Windows XP in april 2014, but I’ve found no clear answer whether activation of Windows XP will still be possible. Back in old days, I’ve purchased quite a few boxes of Windows XP,

Will still be possible to activate my copy after april 2014?

Since this date in April 2014 is known as the EOL date for Windows XP, or the End of Life date, it means that Microsoft will stop providing all updates and support for Windows XP from their end. Hence, activation of new Windows XP products will also not be possible.

i just wanted to ask that if there is a way by which i can upgrade my os from xp to 7 without formatting my computer and loosing the data in my computer.
and is it safe to buy windows 7 cd’s from local market. thats it

Yes this is possible. Moreover, it’s definitely safe to buy Windows 7 CDs from the market, as long as they are licensed copies.

Windows XP is an Operating System released by Microsoft in 2001. It is one of the most stable and widely used operating systems all around the world since then. In the simplest terms, it is the platform on which all your PC’s actions take place. Hope this helps.