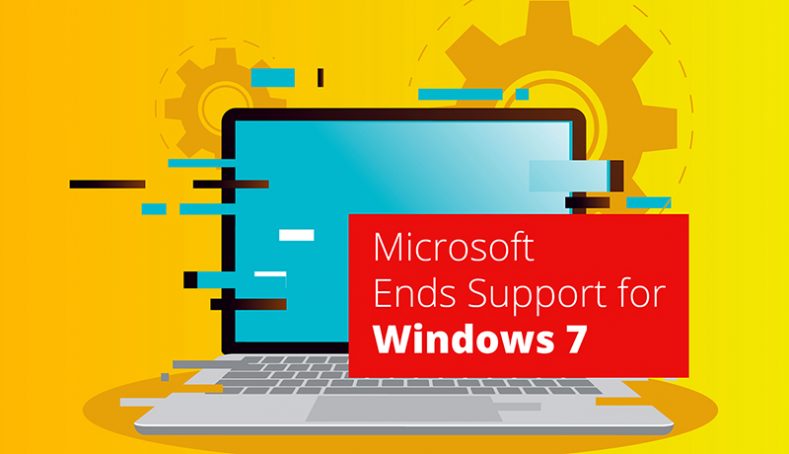 14 Jan 2020 marked a huge day for Windows, as Microsoft ended support for Windows 7, the operating system that had been touching lives for nearly 11 years.

Introduced almost a decade back, Windows 7 was designed basically to fix the failures that came with Windows Vista. The popularity of this OS was so massive that it took Microsoft years of efforts, to instigate people to upgrade to Windows 10 for free. In fact, millions of PCs even today continue to run on Windows 7 especially in the corporate environment, which now leaves them susceptible to security vulnerabilities and exploits as Microsoft ends its mainstream support.

What does End of Support mean?

Well, during the lifecycle of an operating system, constant support in terms of security patches and bug fixes are provided to users of that OS, to protect them against new and advanced malware threats.

Thus, end of life for Windows 7 OS would specifically mean that no more security patches, bug fixes or new functionalities would be available for its users (individual or enterprise), leaving them susceptible to malware attacks. While users can continue using Windows 7, remember that the cost of using an outdated operating system can be really high.

Not to forget the devastating cyber-attacks like WannaCry in 2017 that widely affected the Windows 7 version. Imagine the impact of yet un-discovered and unknown vulnerabilities possibly still lurking around in Windows 7.

For those who are still reluctant about updating to Windows 10 OS, Microsoft will continue to provide support, but at a cost! So, businesses wanting to continue with Windows 7 can still do so, by making costly investments for extended security updates.

Despite Microsoft notifying its users about the Windows 7 EOL for a considerably long time, there are still an estimated 200 million PC users who continue to run Windows 7 (https://zd.net/30lKOC0). The simplest way out of this crisis is to upgrade to Windows 10 OS. The longer users take to upgrade their OS, the bigger are the risks of potential cyber-attacks, especially for those using the OS for accessing business or personal data. So, the best things current users of Windows 7 OS can do are:

To your much relief, Quick Heal products will continue detecting malware files/infections and providing support on Windows 7 OS just as on any other supported Microsoft OS.

We assure to keep you posted about any latest advancements in this regard.

NOTE: End of Life (EOL) is for Windows server 2008 and 2008 R2 as well and same rules are applicable for these versions too.

Follow
Sushmita is the content strategist for Quick Heal, with a passion for creative and technical writing. She is also a published author on...
Articles by Sushmita Kalashikar »