Today one of my colleagues received a message on WhatsApp that read:
“Hello, I. Am riya director of whatsapp, this message is to inform all of our users that we have only 530 accounts available for new phones, and that our servers have recently been very congested, so we asking for your help to solve this problem…”

The message was a fake message but had appeared through a contact which indicates that it is actively in circulation.

In April 2013, WhatsApp CEO Jan Koum boasted of a bigger user base than Twitter. Close to 18 billion messages are processed by WhatsApp per day. That is a good 8 billion more than daily Facebook posts.

WhatsApp is one of the hottest things on mobile, but like everything that is popular and real-time it isn’t devoid of trouble makers. And this time the hoaxes on WhatsApp are back with a vengeance.

To begin with, hoaxes distribute false, often disturbing, information designed to trick recipients into passing the same note onto other users. Hoaxes can have a variety of reasons for being circulated. In an earlier blog we talked about hoaxes and how they are used.

On Jan 162012, WhatsApp users received a message that went like this “WhatsApp is going to cost us money soon. The only way that it will stay free is if you are a frequent user i.e. you have at least 10 people you are chatting with. To become a frequent user send this message to 10 people who receive it (2 ticks) and your WhatsApp logo should turn Red to indicate a frequent user.”

Soon enough, the company blog came up with a post where they declared that it was a hoax.

However, it didn’t stop at that. The messaging service was used to circulate timely and false messages which were almost all the same. 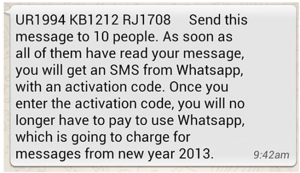 Typically the WhatsApp hoax messages are of two types. One is as shown above and the other appears to be a personal message from the WhatsApp CEO and reads like this “Whatsapp is shutting down on 28th jan Message from Jim Balsamic (CEO of Whatsapp) we have had an over usage of user names on whatsapp Messenger. We are requesting all users to forward this message to their entire contact list. If you do not forward this message, we will take it as your account is invalid and it will be deleted within the next 48 hours…”

With every repeated hoax, the name of the CEO changes and can be anyone from Jim Balsamic to Riya. What is surprising is that these hoaxes are not restricted to the WhatsApp platform only they have spilled over to Twitter and Facebook as well. An example of a Facebook message that has been doing rounds is as below: 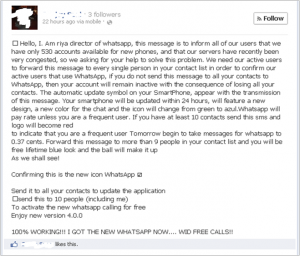 Now let’s do a reality check. No decent service provider will ever word a payment message like a chain letter. If WhatsApp was really serious about charging you for usage, do you think that they will simply ask you to “forward messages” to your friends?

For the “still” confused lot, here are some clarifications:

Reality: iPhone users need to pay a one-time flat fee of $0.99 to download and use the app for life. No other annual renewal payments are required. In fact, if you have to re-install the app, you just have to use the same iTunes account and you will be able to download for free.

Reality: Android, Blackberry OS, Series 50, Symbian and Windows Phone users can download and use the app for free for the first year, after which they will have to pay a renewal fee of $0.99 per year.

For more details you can refer to WhatsApp FAQ section, which clearly indicates that “WhatsApp will never automatically charge you for your subscription”.

Hoaxes like this spread because we believe without actually doing a background check. Awareness is the first step to restricting yourself from becoming the victim or a means to spread the hoax.