They come, they hide, and they mess up – Android.Obad and Android.Fakedefender

It looks like malware writers are leaving no stone unturned to target the Android platform. They are exploring every opportunity to do so; one such opportunity recently popped up in the form of two malwares viz. Android.Obad and Android.Fakedefender. Know what these malware are and how they work, from the rest of the post.

Android.Obad and Android.Fakedefender are more sophisticated than the typical malware families. It has been discovered that, these malware can exploit “Device Admin Privileges”, which boost their stealth level after they get installed in a device.

How does it gain Device Admin Privileges? 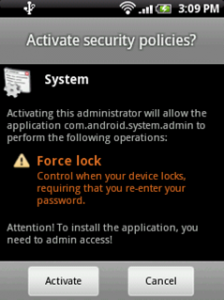 Android.Obad takes advantage of the following vulnerabilities, which makes it difficult for analysts to reverse engineer it. 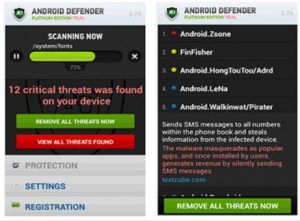 Note: Just like Android.Obad, it is also difficult to remove Android.Fakedefender from the device once it has been installed. It changes the device’s settings so that the user is unable to perform a normal factory reset.

We would strongly advice users to be on guard against applications that ask for “Device Admin” privileges.