“The Rock Passes Away!” – Beware of this Facebook Hoax!

Most of us are familiar with WWE superstar Dwayne Douglas Johnson, popularly known by his ring name ‘The Rock’. Although we miss watching him tussling with other wrestlers, we do get to see him in movies. But unfortunately, we will never get to know what the Rock is cooking, because according to a latest Facebook post, he is dead. 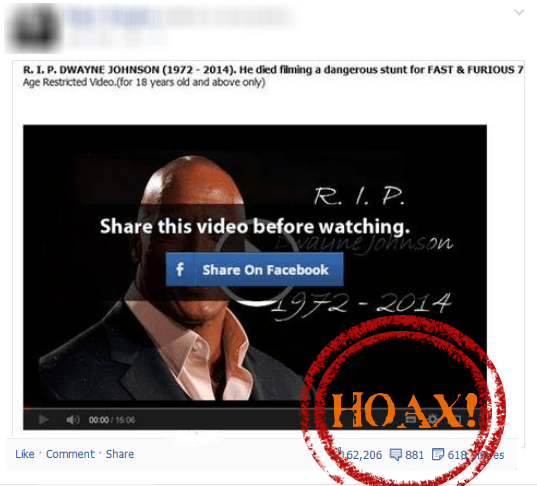 A post about the tragic demise of The Rock is doing the rounds on Facebook. The post claims that the actor met his death during a shoot of Fast and Furious 7. A Facebook page named “R.I.P Dwayne Johnson” was visited by millions of fans, who flooded the comment space with condolence messages.

The Facebook post also claims to show a video of how the actor died in the accident.

While all this may sound tragic and concerning for the fans of the semi-retired WWE superstar, it is but another Facebook hoax about deaths of celebrities. Johnson’s representative officially announced that the actor is in good health and doing well.

– After sharing the post, you will be redirected to another page claiming to host the video.

– If you proceed further and click the play button, either you will be asked to fill an online survey form or download a plugin or a software to watch the video. The survey form is just to trick you to give away your personal information to the scammer, and the plugin could be a malware.

– And even if you risk everything and fill the form or download the plugin, you won’t get to see any video, because there is none to begin with.

Beware of Facebook Hoaxes and Similar Online Scams
Before sharing or responding to such posts and news that seems out of the ordinary, always run a quick check on reputable news portals and online sources. Sharing untrustworthy information without checking the facts may not only spell trouble for you, but others who are linked to you as well.

Read our post on Common Facebook Scams to know more about online scams and how to stay away from them. Stay safe!