Fraudsters have gone one step ahead and started circulating e-mails that resemble the Reserve Bank of India’s (RBI) official letters. These emails appear to come from Mr. D. Subbarao, the Governor of RBI. Such con letters appear to come from the Funds Remittance Department of RBI and they tell the recipient that he/she has been “listed as a beneficiary in the recent schedule for payment of outstanding debts incurred by the RBI government 2010. To 2012 According to your file, your payment is categorized as: contract type: Lottery/Inheritance/Unpaid Contract Funds/ Undelivered Lottery Fund. Payment file: RBI/ID1033/10. Payment amount: 500,000 USD. (United State Dollars).”

The scamsters then tell the victim to deposit 18,500 INR in an account after which (sic) “500,000 USD. (United State Dollars). Will be release to you, as it was committed for (RBI) Governor that Beneficiary will have to pay crediting fees only.” The victims are also asked for their mobile number, address, bank account number and the account holder’s name to deposit the required sum. Once the victim deposits the money in the said account, it can be withdrawn immediately so that fresh demands for a higher sum can be made.

The fake Letter is as follows: 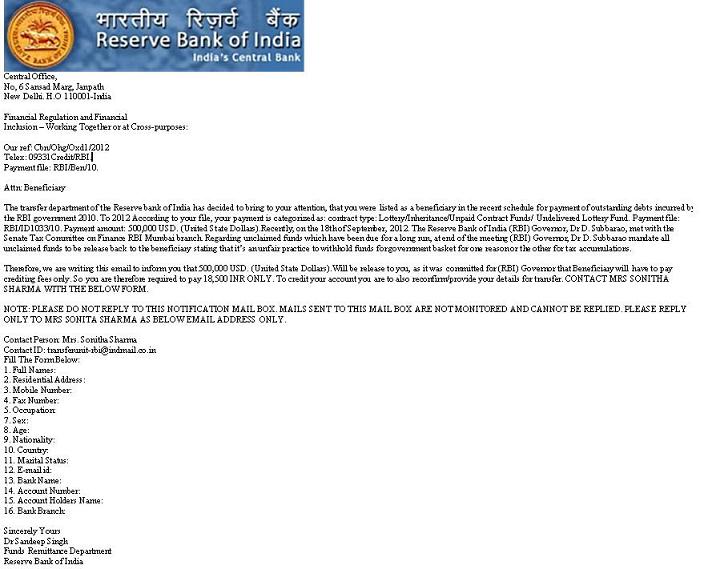 The fraudsters initially ask their potential victims to deposit small sums of money for reasons such as processing fees/transaction fees/tax clearance charges/conversion charges/clearing fees etc. The victims are also asked to deposit the money in a specified account in a bank. The fraudsters often possess multiple accounts in the names of individuals or proprietary concerns in different bank branches to collect such charges.

Once the initial amount is deposited, the demand for more money follows with more seemingly official reasons. Once they have accumulated a sizeable amount in these accounts, the fraudsters withdraw or transfer the money abroad and then vanish, while the victims are left in a lurch.

We advise Quick Heal users to be wary of such phishing threats and fraudulent emails and not fall for such promises of free funds. There have been several such RBI related fraudulent emails in the past, so people should be aware of these tricks by now.

The evolving nature of malware and security threats