If our readers can recollect, last year we had a blog post about the arrival of WhatsApp Plus, a third party/modified version of WhatsApp. Just yesterday, we were made aware of an interesting incident about this app. Read all about it below. 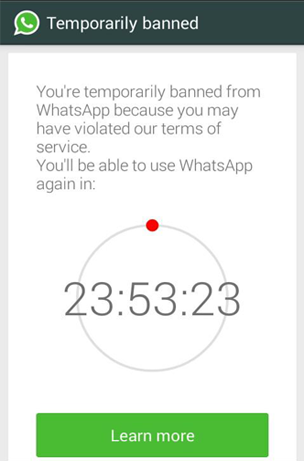 A couple of days ago, users of WhatsApp plus were greeted by the screen above when they opened the app. As the screen clearly states, users of this app are banned for 24 hours from using the service. Clicking ‘Learn More’ takes them to a screen as shown below, where users are directed to uninstall the app and install WhatsApp from Google Play. WhatsApp plus has been around for quite sometime now. It was developed by a Spanish developed called Rafalanse in 2012. It seems, since its launch, this app has been downloaded over 35 million times. The app was never available on Google Play, but was propagated on third party web stores.

WhatApp’s FAQ page also had the same message for users

So What’s Next for WhatsApp Plus Users?
According to Official WhatsApp+ Community on Google Plus, the app development will stop for good, and no further work will take place on it.

Hence, get WhatApp+ uninstalled from your device, and install WhatsApp. Once the 24 hour count down ends, you will be able to use its service.

In Related News:
A day before this ban occurred, rumors were afoot that WhatsApp is working on a new version called WhatsApp Plus. This is a complete hoax, because as we know, WhatsApp+ was launched in 2012. And WhatsApp has not declared any such news on its official site. Users are advised not to get lured away by such news, and always verify the official website of the companies involved in it.

In Conclusion:
It is understandable that WhatsApp+ users must have faced inconvenience because of the ban. But in WhatsApp’s defense, the company never announced or was never associated with the former app in the first place. So, this ban is not something that we had not expected. The lesson to be learned here is, always trust official stores like Google Play for apps. And, it is also worth protecting your device with a reliable antivirus app such as Quick Heal Mobile Security.

Security news and updates from the last week