Guess what would be a better way for a predator to stalk its prey, rather than chasing it? Well, waiting patiently at a watering hole, where its prey would eventually turn up. Strangely, in the online world, hackers are also using the same strategy to trap their victims. This blog gives you an overview of watering hole attack.

What is a Watering Hole Attack?
We are discussing here a new breed of online fraud called “watering hole attack” – an evolved form of spear-phishing. In spear-phishing, the scammer intends to target individual victims by sending malware-infested emails, and luring them into giving confidential information. A watering hole attack, on the other hand, does not use any such emails, for it infects an entire website the victims of a targeted business or organization are most likely to visit.

In other words
A watering hole attack is like poisoning an entire grocery store of the town and waiting for someone to buy from it, instead of luring each victim into buying a poisoned item. 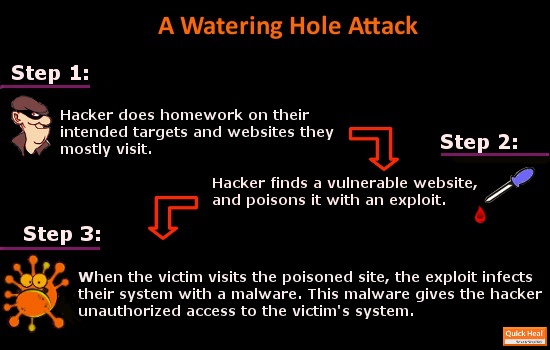 The Working of the Attack

Step 1: The scammer does homework on its targeted victims and “trusted” websites they frequently visit or are most likely to visit. For instance, mobile developers usually visit a developer forum, and so on.

Step 2: Once these websites are identified by the scammer, they are tested for security vulnerabilities. If any such vulnerability is found, then the scammer injects the website with an exploit [a piece of data or a series of commands].

The Final Blow: When the victim visits the compromised website (the “watering hole”), their system is scanned for software vulnerabilities (old and/or new) corresponding to the injected exploit. And if the system is found so, then the exploit drops malware onto it, allowing the attacker to initiate malicious activities. In most cases, the malware might be a remote access Trojan, that can invite other malware to enter the system.

Why Watering Hole Attack is Effective?
Experts say, watering hole attack is an ingenious form of fraud, for it targets websites that are legitimate, frequently visited, and less likely to be blacklisted. If you regularly follow your local weather forecast website, then you might have fewer reasons to suspect it as a malicious website. Same goes with mobile developers, who frequent a variety of websites (developer websites, forums, etc.) to collate essential information or to discuss their projects. Given such a scenario, even training employees to be on guard for such web attacks is futile, according to most security officials.

The Zero-Day Advantage
Watering hole attacks are also effective, for they have the “zero-day exploits” card in their deck. These exploits take advantage of security holes or vulnerabilities that have surfaced recently and are yet to have any solutions or fixes. So, once these zero-day threats strike, the targeted victim is left with less or no defence at all.

Companies that were Recently Attacked

The web security feature of Quick Heal Security Solutions employs real time cloud-based protection and browser sand box. The cloud-based protection blocks malware-infected websites (“watering holes”), and the sandbox shields the user’s system against zero-day attacks. As everyday Internet users, implementing all such security features is the best we can do to evade scams such as watering hole attacks.

Logjam Vulnerability: Why You Need to Upgrade Your Browsers

How does quick heal protect from watering hole attack ?

First is the real time cloud-based security protection. It blocks access to malware-infected websites, or websites that carry out phishing or fraudulent activities.

The other security feature is the browser sandbox. It creates an isolated virtual environment for your internet browser. So, even if you visit any malicious website, your computer won’t be affected. You can read more about this feature here.

Thanks. Its good piece of information.

does your system protecting us from such incidents protect your clients ? And how ?

Thanks Rajib for the info.

Really good info regarding the watering hole attack.
Thank you.

Very informative, please carry on giving such things so that common users also get some knowledge of these.

Good job! You are protecting your clients well with forewarning info. Thanks.

i renew the quick heal on 9th June2013, validity given upto26th Nov 2014, but it is not work properly at my desktop, pl. help immediately. thanking you, yours dipak

Good images and content on watering hole attack. thanks a lot!

Over thousands of malware come up on daily basis. Data about malware from anonymous sources and dedicated organizations are fed to a repository we know as “cloud”. Quick Heal studies, analyzes, and works on this data, to identify new threats and come up with patches/fixes. These fixes (in the form of regular updates) are then streamed across its home and enterprise customers constantly thus, providing real-time protection.

i have installed new antivirus of quick heal, but i am unable to upload it . it has sep 2013 validity.

I appreciate the desirous activities of Quick Heal People who are working to curb the viruses, with zeal, hard work and intelligence of course.