A new Android malware, known as MazarBOT, has been discovered in-the-wild and this dangerous sample has the capability to hijack an unsuspecting user’s smartphone. The malware gets into a victim’s phone with an SMS as follows:

You have received a multimedia message from +[xx] [xxxxxxxxxx]. Follow the link hxxp://www.mmsforyou[.]Net/mms.apk to view the message.
When we tried to access this embedded link at our Quick Heal Threat Research Labs, an APK was downloaded into the vulnerable phone. When analyzed, the APK was found to be an interesting malware strain with extremely dangerous capabilities.

The wordings of the SMS are such that the user will be naturally inclined to click on the link that is included. Once the link is clicked, the APK starts downloading automatically and when this APK is then installed, the user can see the name “MMS Messaging” with an icon that is similar to the in-built Android SMS app.

After launching “MMS Messaging” a system prompt is shown as seen in Figure 2 below. This prompt allows the malware to get the privilege of a Device Admin. This privilege is the access right that is given by the Android OS to the malware in order to perform a factory reset of the device. To make the user believe that his permission is required to view the MMS, the malware shows the caption “Get video codec access”. Interestingly, once this page has been opened the user cannot back out or close the prompt. Even if the ‘Cancel’ button or the ‘Home’ button or the ‘Back’ button is pressed, the same window will open immediately until the user clicks on ‘Activate’. 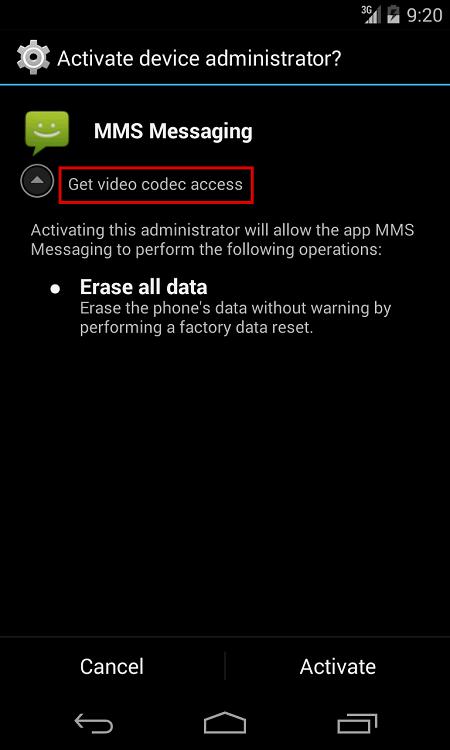 Another integral feature of MazarBOT is that it makes use of TOR and Polipo Proxy libraries to hide its network traffic from monitoring tools that are used by security researchers. Its Command & Control server is located at hxxp://pc35hiptpcwqezgs[.]onion and is set up on the hidden web which is accessible only through the TOR network.

Actions performed by MazarBOT in the background

This malware cannot be easily removed in the traditional way because of its ability to get Device Admin privileges. Moreover, it does not allow users to easily deactivate that privilege. In order to get rid of the malware, the user will need to reboot the device in Safe Mode and then deactivate the Device Admin privilege. Only once this has been done can the user uninstall this malware from the device.

Quick Heal detects this malware on Android smartphones as Android.Mazarbot.A.

Why Should you Get Quick Heal for your Android Device – Video

YES! This helped me remove the Mazar installed on my fathers phone. THANK YOU 🙂
1: Boot into safemode
2: Go to security and disable admin prviledge
3: Remove malware app (PostDanmark in this case disguised in Malware)