An in-depth study has been released by ASSOCHAM-Mahindra SSG and according to this report, cyber-crime incidents in India are set to double to almost 300,000 in 2015. The primary targets of these crimes are going to be entities in the financial space, security establishments for national defense and the integrated social fabric.

The Secretary General of ASSOCHAM, Mr. D. S. Rawat had this to say – “What is causing even more concern is that the origin of these cybercrimes is widely based abroad in countries including China, Pakistan, Bangladesh and Algeria among others. The economic growth of any nation and its security whether internal or external and competitiveness depends on how well is its cyberspace secured and protected.” The study also goes on to say cyber-crimes are growing at a compounded annual growth rate (CAGR) of 107% in the country and about 12,456 cyber-crime incidents are reported every month.

But according to this study by the Associated Chambers of Commerce & Industry in India (ASSOCHAM), 2015 will surpass all these numbers when it comes to cyber-crime in the country. And that is without taking stock of all the unreported cyber-crime incidents that occur as well. 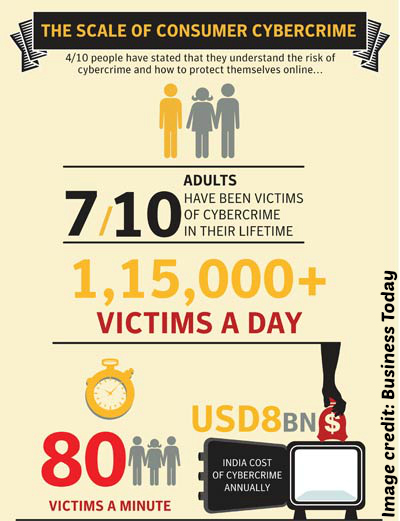 Notable highlights from the study

The report also contains several interesting statistics and figures that serve as timely reminders of the need for heightened security protocols on computers, smartphones and other connected devices as well. Here are some noteworthy highlights.

These numbers shed some much needed light on the state of cyber-crime in the country and clearly indicate that these numbers are only going to increase further in the near future. It is imperative now for computer users and especially smartphone users, to be aware, secure and proactive against all kinds of rising threats.

We here at Quick Heal take immense pride in our products and services that are designed to safeguard home users and enterprise users against cyber-criminals. No matter what device you operate on, we have a solution that caters to your requirements and scales up as your usage grows. In today’s hyper-connected Internet era, this is the very least that every connected device needs.

Unable to Shut down or Restart Windows 7 systems?