Delhi zoo witnessed a tragic incident on Tuesday where a youth was mauled to death by a white tiger. Videos of the incident captured by onlookers have gone viral on the Internet. And as always, Internet crooks have started making good use of this incident to scam social media users, especially those on Facebook. 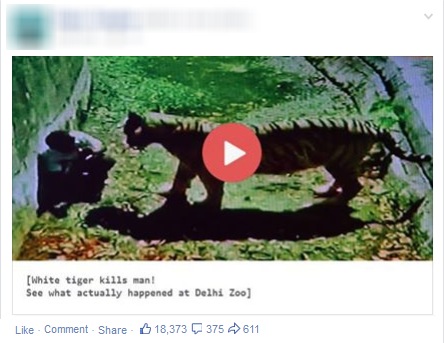 Reportedly, the deceased fell into the enclosure of the tiger at the Delhi zoo. Till now, two videos have been released on the Internet where the tiger is seen pawing at the 20-year-old man and after about 15 minutes dragging him away into a corner of the enclosure.

While these videos are genuine, we came across a few posts on Facebook that claim to show actual footage of the incident. These videos were titled “What had actually happened at the Delhi zoo?”, “See what the news channels are not showing you!”, etc.

Using a test account, we clicked one of these posts to see if they are genuine or not. We were taken to a fake Facebook page, where we were asked to share the video before watching it. Once we did that, we were asked to fill a survey form before we could watch the video. Even after filling up the form, we could not find any video whatsoever.

So, to cut a long story short, if you come across any social media posts or links related to the Delhi zoo incident, verify the website and the source where the video is hosted. Clicking such posts might redirect you to a fake site or drop a malware on your system. You can trust websites of popular news channels, but beware of any random posts even if they have been shared by your friend. Exercise the same practice before sharing any such posts or liking them.

Germans demand anonymous accounts over Facebook: Wise move or not?