A new version of Android always brings with it tremendous amount of fanfare and adulation. Some versions gain more popularity than others and penetrate deeper markets. However, ‘fragmentation’ is a major hindrance that Android faces and the latest upgrades seldom reach all markets simultaneously. This creates several security loopholes that can be exploited.

A patched OS brings several upgrades that enhance the layers of security and combat the latest threats. With Android malware on a steady rise, an upgraded version simply provides the best security. Older versions are more susceptible to malware and other threats as many people feel their devices are invulnerable. Applications that are infected with malware find it easier to enter phones that are not running the latest upgrades. Similar to desktops, smartphones should also be updated with the latest patches for better security.

A lot of Android users across the world are not even close to the latest upgrades and some of them will never even get to use them at all. Here are the reasons for that:

These numbers are taken from Google Play (Android Market) and do not necessarily include all registered users and also do not include users who bought Quick Heal Mobile Security from other sources. 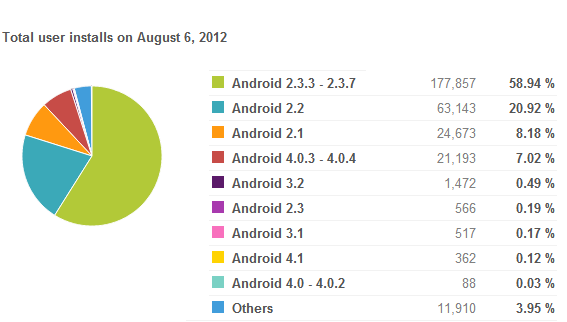 This table lists the top 10 Android malware families that Quick Heal detected in 2011. Older versions of the OS are more gullible to these threats than the latest ones.

We advise all users to regularly update their Android version. This is more applicable to users who store sensitive data on their smartphone or carry out financial transactions. Admittedly, this is not possible for all users. Hardware limitations are a hindrance so one must study the requirements of a new OS version carefully before installation. The latest updates enhance security but can cause a dip in performance if the hardware requirements are not met.

5 Tips for Online Smartphone Shopping Nobody Tells You About